Alstom has revealed its hydrogen-powered train was able to cover 1,175 kilometres in Germany without having to refuel its tank, representing a “new global milestone for clean, alternative drives in rail transport”.

Its Coradia iLint train, which is powered by a hydrogen fuel cell that produces electrical power for traction, started out in Bremervörde, having been built and developed by Alstom in Lower Saxony, before then travelling through Hesse to Bavaria, through Burghausen at the German-Austrian border, ahead of coming to a stop in Munich. In this time, it did not have to refuel, emitted only water and operated with very low levels of noise. “With this journey, we have provided further proof that our hydrogen trains have all the prerequisites to replace diesel vehicles,” said Alstom CEO, Henri Poupart-Lafarge.

The train is now set to travel through Berlin as part of InnoTrans 2022 – the International Trade Fair for Transport Technology, which is set to run until 23 September.

Alstom has previously hailed its Coradia iLint model as the “world’s first hydrogen train”. In late August, it announced that it was to start passenger service on a 100% hydrogen operated route. Through this agreement, 14 hydrogen powered Alstom regional trains, operated by Elbe-Weser railways and transport company (evb) on behalf of the transport authority of Lower Saxony, LNVG, will gradually replace 15 diesel ones. 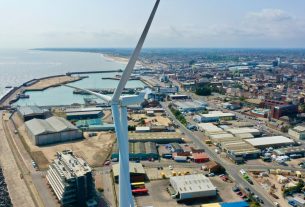